Belarus is my last country to visit in east Europe, so I chose to finish it with a bang. That is, quite literally. I joined 250.000 Belarusians in celebrating the liberation of Minsk from the Nazi’s back in 1944. In particular I attended a massive Soviet-style military parade, showcasing a wide range of Soviet but also more modern pieces of war equipment. Here is how I experienced the day.

“BOOM”. Out of nowhere an incredibly loud noise shook my whole body, leaving me stunned. “What just happened?”, I asked myself. Did a tank accidentally fire into the crowd or something? “BOOM”, again. The loud, deep thunder echoed against a huge backdrop of Soviet blocks far away in the distance. The power of the thunderclaps was so overwhelming, I started shivering as another few rounds were fired.

But it seemed I was the only one affected. People around me were instead getting excited. They knew better: Belarus holds a military parade twice a year (!), and for them these huge explosions marked the beginning of yet another one, on July 3rd 2017.

The day of the parade started very early for me. I woke up at 5:30 in the morning to head out to the National Library of Belarus, about 6 kilometers away from the city centre. I had gathered information that the column would pass here at 6AM, making its way towards the city center ahead of normal traffic.

The reason to get out so early was simple. Not knowing if I would be able to bring a large DSLR camera to the parade, I figured at least I should be able to use mine early morning while way out of town. Extra bonus was the magnificent architecture of the library, which would surely make for an iconic picture. I could not leave Belarus without this killer shot.

And so did I stand there early morning, virtually all by myself in the cold.  The empty street, already shut down by police, signalled that I had come to the right place. And indeed minutes later the first tanks started rolling in, accompanied by the sound of heavy diesel engines and tracks squeaking over the bitumen. I grabbed my camera, hoping that no KGB would come after me, and zoomed up until the entire building fit the frame. Within 3 attempts I made my killer shot.

After watching dozens of vehicles pass, which took about 15 minutes, the first heavy missile systems came into sight. Among them the BUK rocket system, which became infamous after a BUK rocket (not from Belarus) shot down Malaysia Airlines MH17 over Ukraine. It was the first time I came face to face with this system, and it made me really uncomfortable and sad thinking of the 298 (!) people that died in the MH17 event.

Click on the pictures below for a full screen slide show: 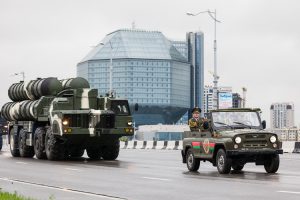 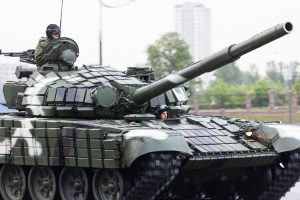 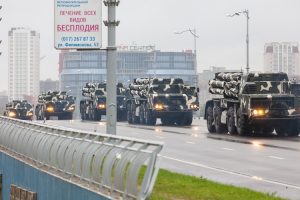 After taking more than 150 photos I returned to my hostel to switch my large camera to a much smaller one and head to the parade site.

The walk to the main parade location took well over half an hour, passing a 2-km long column of double parked army vehicles on the main street. I went through the checkpoints and managed to find a place front row. After waiting for one hour, from here I witnessed the ceremonial salute to two high ranking officers of the Belarusian army. After inspection of the troops they all started a synchronised marching down the street, saluting the president of Belarus on the way.

After all the troops were gone, the motorised part of the parade started. In front was a WWII-era T34 tank, the main battle tank and star in the liberation of Belarus from the Nazi in 1944. If there was anything romantic about the parade, it would probably be this symbolic appearance.

Click on the pictures below for a full screen slide show: 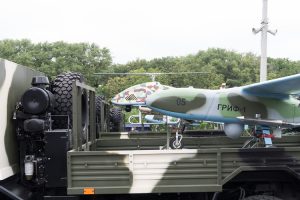 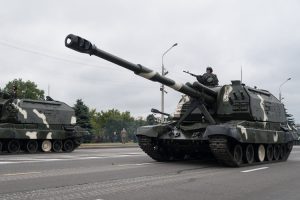 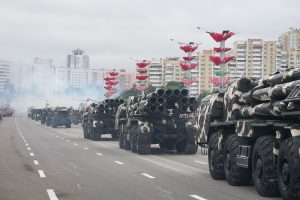 A show of force

After some of the last military vehicles were gone, the skies filled up with low-flying war jets, huge helicopters and a large cargo plane. In the end the whole military part of the parade lasted for about 40 minutes, leaving many of the spectators in high spirits.

Looking back, as I expected it was an orchestrated and mighty show of military force. I have been at an almost exactly similar parade in Ukraine, so I recognised a lot of the missiles and artillery. But for sure this one seemed way more out of proportion considering that Belarus only has 10 million inhabitants.

READ MORE: A Soviet-Style Military Parade in the Streets of Kyiv, Ukraine

I’m not here to judge, but I do know that a lot of younger adults (who did not attend) complained to me that such military parades are too expensive and “not from this time”. The kids I saw standing next to me never bothered though. For them it was just a fun day out with the parents, not yet understanding about paying taxes and knowing the horrors of war and conflict.

Tips for watching the parade

Is it safe to go? Totally, don’t worry! Security checks are very strict, and the whole perimeter around the main festivities is securely bomb checked inch by inch the day before. Despite being surrounded by war equipment, I imagine there’s no safer place than being at the parade at that moment. 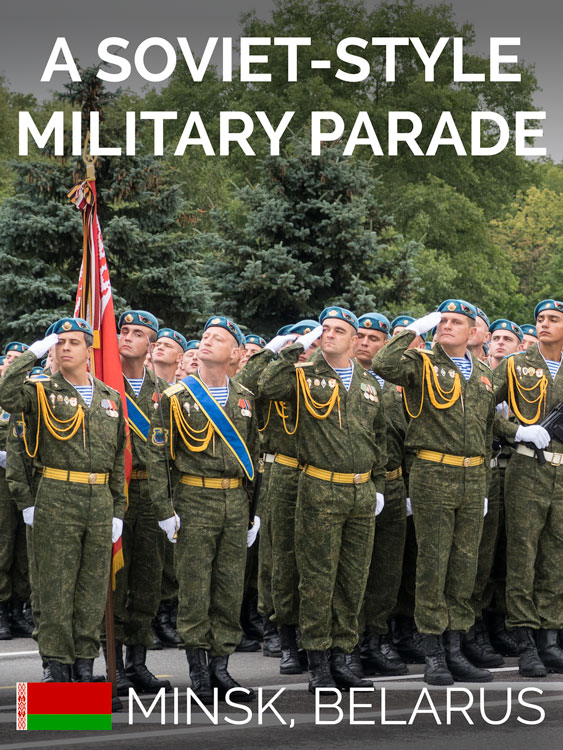 What do you think of these type of military parades? Would you ever want to see one?