On top of a 35 meter high man-made hill in Belarus lays one of the most incredible Soviet memorials ever built. Kurgan Slavy (or Mound of Glory in English) is located about 25 kilometers away from Minsk city centre and is a must-see if you are in the area.

The memorial commemorates the greatest battle for the liberation of Belarus from the Nazis in July 1944. Construction began in 1967 on the exact same place where more than 100.000 soldiers of Hitler’s army were eventually surrounded by the Soviet army. The battle that followed lead to the Wehrmacht’s greatest single defeat in the whole war. Exactly 25 years later in 1969 the memorial was officially opened.

The main feature of Kurgan Slavy is the obelisk, nearly as tall as the hill it is standing on. Shaped by four titanium-coated bayonets, each one represents the army fronts involved in the battle. At the base of the bayonet is a connection to a large stone glory ring. On the inside you can find a spectacle of carefully laid out mosaic stones, in bright red/orange colours reading “Glory to the Soviet army, glory to the liberation army”. On the outside there are deep and impressive reliefs of soldiers and partisans overlooking the region.

If you can you make it on May 9th you will be there for Victory Day celebrations. Lots of people will lay flowers and there will be festivities in the surrounding fields. Another interesting time to go would be by night, even though I never managed too. I know the entire structure is lid up quite spectacularly, surely making for some good photos. The only period I would stay away from is winter due to the snow covering the hill.

Getting to the monument can be a bit of a pain. It’s located on a large highway junction with no pedestrian ways. There is no real bus connection except for the express bus 300Э that passes by the memorial halfway between the airport and Minsk. I tried to take one from the central bus station but could not convince the driver to drop me off. The nearest village Slabada is served by a slow elektrichka commuter train only two or three times a day from Minsk. If you manage to get one, you still need to walk quite a bit and figure out how to cross the junction by foot without getting caught.

If you are to visit Belarus on a 5-day visa just like I did, I think it only makes sense to take an Uber. I took one from the city center for 18 BYN (8 euro / 9 US dollar) one-way. There is free wifi in the nearby restaurant if you want to book an Uber back again. If you want to save money, book the return only to Uručča metro station (the final stop on the blue line) and continue from there by metro. Or if you lucky like me, you can find some other visitor with a car to hitch a ride back to Minsk with. 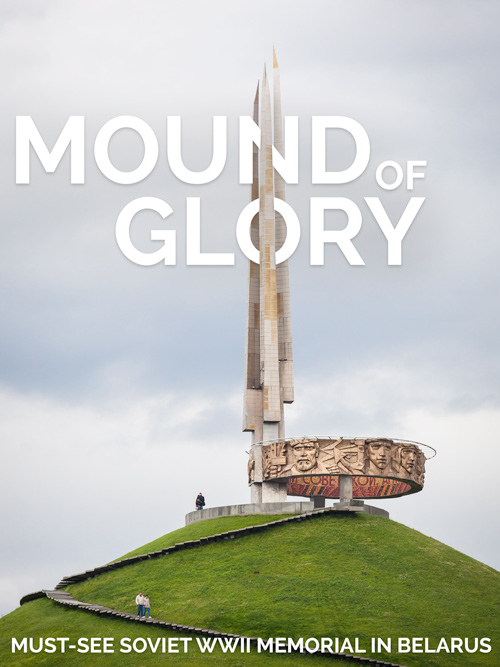 Do you think there are even more must-see Soviet memorials out there? Tell me which ones in the comment section down below and I will definitely check it out!