I love the thrill and excitement of crossing overland borders, especially in unusual places. In that sense, perhaps THE most interesting and notorious one of all is the India Pakistan border. Every single day when the border closes, soldiers from the two nuclear super powers come face to face with each other and engage in a bizarre and hostile standoff. And the best thing: we are all invited to come and watch!

This situation is found at the so-called Wagah border and has existed ever since 1959. It follows a dramatic and violent partitioning of British India in 1947 that led to the creation of the two nations as we know it today. The hostility that remains, can clearly be seen during a carefully choreographed ritual of military bombast. It lasts for a small hour and ultimately leads to a delicate ceremony of lowering the two national flags.

Every day thousands of patriots (and then some tourists) travel from far and beyond to the border located between Amritsar and Lahore. The main attraction is watching the soldiers as they battle it out to see who can show the most aggressive pose of all. Yes, as weird as it sounds, but they raised this to an art form on its own. And oh, it also involves a one-legged man.

Entering from the Indian side

My first experience at the India-Pakistan border is on the Indian side. After being very sick for days, I finally feel the strength to join a group of backpackers from my hostel in Amritsar. We are informed to leave early and not to bring any bags. I take some camera gear in my hands, my passport and jump in an auto rickshaw to race off towards Pakistan. It is a moment I had been looking forward to for many years, so you can imagine the excitement.

During the one-hour drive we pass several military academies and lots of dug-out bunkers. On roundabouts we see two Pakistani tanks positioned as war trophies, a stark reminder of the three wars the two countries have already fought over the last 70 years.

After easily clearing several passport checks, once inside the arena I am immediately struck by the sheer scale of the place. I had researched quite a lot of Youtube videos, but never did I come across anything that looked like this. In fact, India just finished building a gigantic arena towering out way above the Pakistani version.

I look around me as people blaze away in the heat. I’m keen to find a good spot for my photography, but unfortunately they do not allow me to take a front row position. I do manage to find a spot close to the border fence halfway up a tribune. It is still at least one hour to go, so like all the others I brace myself for the sun.

Meanwhile women are showing off their patriotism by parading through the arena with Indian flags. An Indian speaker is cheering up the crowd under the deafening noise of propaganda tunes. Every once in a few minutes the people shout “Hindustan, Zindabad!”, which I later find out means “Long live India”. The scene culminates in a wild Bollywood dance party when over a hundred women and kids take the stage.

About half an hour in the music abruptly stops when two poker-faced soldiers emerge, clearing the street while marching towards Pakistan. Carrying automatic machine guns, Ray-Bans and consumer-type headsets, they position themselves right next the border fence.

Then the moment everyone had been waiting for. An 8-man squad of well-dressed soldiers appears in the center of the road. Their khaki uniforms complemented by prestigious yet funny looking hats, they are the stars of the ceremony.

The crowd explodes, people are absolutely loving it

The soldiers march towards the border in sync and come to a halt about twenty meters in front of the gate. What happens next is utterly bizarre.

Each soldier gets a turn to break out of the group and aggressively speed towards the gate. On the way each one kicks up his right leg well above the head, and viciously hits the ground with the metal heel. The group gets back together and engages with its Pakistani counterparts in a professional death stare competition while fist-pumping both arms way up in the air. The crowd explodes, people are absolutely loving it. For as far as I can see, on the Pakistan side the exact same thing is happening.

Now here is the fun part. Unlike most others, I was able to watch the whole ceremony again from the Pakistani side. Obviously not on the same day, but roughly a week later after having travelled around in Pakistan.

In a sense the experience is largely similar. The atmosphere again being highly patriotic, the rituals well choreographed and the chants similar. “Pakistan Zindabad” is an often heard phrase, repeated dozens of times across the arena. It seems both sides are experts at looking aggressive without actually being aggressive. Soldiers on both sides can stretch their legs beyond what anyone would think is possible.

If there is one difference, it would be that the Pakistanis are there in smaller numbers (and especially the tourists). Though the energy level is just as high, and the screams just as loud, it does make for a more organised spectacle. The crowds stay on the tribunes, and with the help of my Pakistani host I am the only person granted permission to walk around a bit to find the best angles for my photos.

India and Pakistan not only share a border, but also a tragic history of conflict. It dates back to 1947, when British rule over the Indian subcontinent came to an end. What followed was a violent partitioning along religious lines, splitting up British India into what is now known as Pakistan, India and Bangladesh (at the time considered East Pakistan). Since then three wars have been fought and it is estimated that during this time over a million people lost their lives.

Today India and Pakistan remain entangled in conflict. The hottest point is the disputed Kashmir region, located approximately 100 kilometers north of the Wagah border. With both countries being nuclear super powers, there is a fine line between peace and mutual destruction.

Perhaps the main star of the Pakistani ceremony is a one-legged cheerleader. I noticed him already while on the Indian side, but once in Pakistan I can get a much clearer view of him. I see him literally jumping around the area, addressing the crowd as the ceremony is taking place. In one hand at all times the Pakistani flag, in the other occasionally a crutch.

The border closing ceremony concludes with the lowering of the national flags. A well-respected moment, comically accompanied by a dissonant harmony of horn sounds. As soon as the flags are taken down there is a remarkable and quick handshake across the line that is easy to miss. A more dramatic act of slamming the gates shut, signals the soldiers to parade back to their border post.

It marks the end of the daily ceremony, which most likely will repeat itself time and time again for the years to come.

The fact that India and Pakistan can engage in a perfectly mirrored choreography proves to me that people on both sides of the line are in the end not that different at all. Ignoring the politics, Kashmir conflict and different religions for a brief moment, it opens a window of hope that things can get better.

Meanwhile the Wagah-Atari border remains the only overland option for foreigners to cross between India and Pakistan. If you need to cross yourself, for obvious reasons make sure to do so before 4pm!

Have you ever been to the ceremony? What are your thoughts about it all? And if you would like to go, did this article help you to get a clearer picture? Leave your comments below and share if you care! 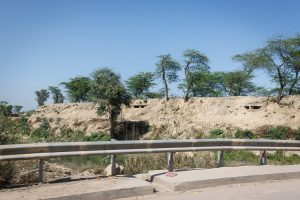 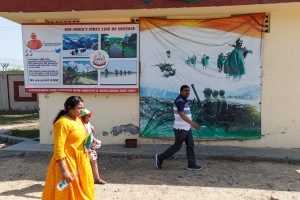 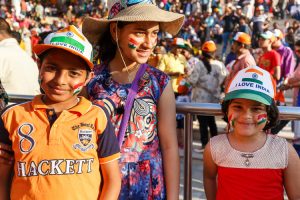 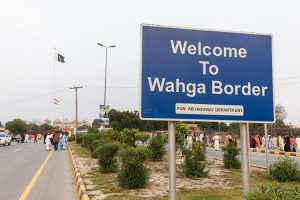 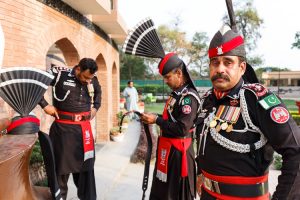 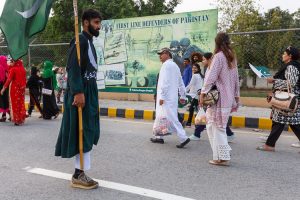 464
SHARES
ShareTweet
[wysija_form id="4"]
Previous ArticleYear in Review: the 17 Best Places I Visited in 2017
Next ArticleTourism in Pakistan: Visiting The Swat Valley as a Solo Backpacker