Inside Iran – Iran through the Eyes of a Couchsurfer 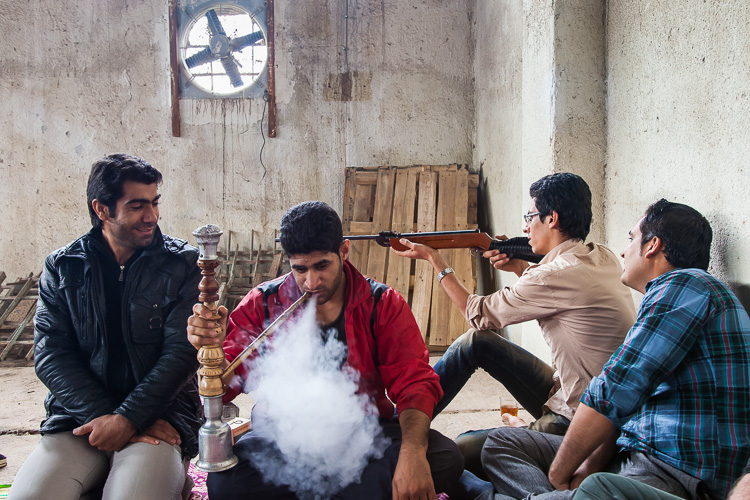 Is Iran safe? It’s one of the most commonly asked questions by Westerners. After decades of economic sanctions by the international community, you would think the Iranians would have built up an intense hatred against us, while in fact they can be considered one of the most welcoming people on this planet. Back in January 2013, I went to Iran and Couchsurfed my way through thousands of kilometers. I experienced first hand the great hospitality of its people and tasted some of the finest foods of my life.

More and more travellers these days are spreading the word: Iran is a great travel destination. It is safe, cheap, beautiful, exotic and not spoiled by tourism like other places in the world. But Iran still has a long way to go.

When I told the people around me that I was planning to travel to Iran, I saw many surprised faces. The most common reaction was: “Iran, isn’t that dangerous? Do you want to die?”. Maybe not so surprising either, for most people it is hard to distinguish Iran, officially the Islamic Republic of Iran, as a country of relative stability. I have to confess though, that my knowledge about Iran was rather limited too. In fact, on my visa application I literally filled out the following itinerary:

“Visit some mosques, take pictures and drink tea with the locals”

I had no clue why in fact I wanted to go to Iran, but for sure it wasn’t to endlessly visit mosques. Perhaps it was just because no one else goes to Iran, or perhaps because I knew some Iranian students at my university. Anyway, with the help of the locals themselves I was soon to find out that there was a lot more to do then just drink tea and visit mosques!

Long ago Iran was at the heart of the Persian empire making it that everything in Iran is really old. Probably some of the oldest remains of human civilisation on this planet you can find in Iran, think about several thousands of years BC. Its heritage also learns that Iran is not an Arabic country. The people have Persian roots, and so they do not speak Arabic but Farsi. They also use a different calendar. The Iranian calendar must be one of the hardest one to convert to our own, making it rather challenging to make sense of half of the visa I received.

Visit some mosques, take pictures and drink tea with the locals…Bart van Eijden

Modern-day Iran has been struggling to get recognised as a tourist destination. After the country converted to Islamic rule in 1979 (known as the Iranian revolution), the U.S. hostage crisis, the subsequent war with Iraq (1980-1988), and continued allegations of a secret and illegal nuclear program, what was once a booming tourism industry had collapsed under the subsequent sanctions imposed by the international community. Add to that a crazy guy shouting around that Israel should be wiped off the face of the Earth, and a law that all women should cover their hair in public, and you could somehow feel why many people do not consider Iran as a place to visit.

How distant Iran’s politics can be from the general opinion of the public, is something I would discover soon though.

To figure out where I wanted to go in Iran, I used the website of Couchsurfing to see if I could find some people willing to help me out. Couchsurfing is a website where locals can invite travellers to stay over at their house for the sake of cultural exchange. There is no such things as a business model underneath it, like is the case with AirBnB. Couchsurfing is about sharing and is not associated with giving money.

So whilst I was still in The Netherlands, I sent out a request on the website to ask for anyone who can host me in the city of Shiraz. Being new to Couchsurfing, I did not know what to expect. Shortly after, I was overwhelmed with invitations from throughout the country, so many that I had to reject some of them. “I am so glad to see you and happy of your travel to our country and culture. I will be happy to be your host”, and “I am always available for hosting my good guests. You are always welcomed in my place”. Reading back the endless list of invites makes me realize even more how hospitable the Iranian people are.

I am so glad to see you and happy of your travel to our country and culture. I will be happy to be your host.Invitation from an Iranian couchsurfer

Of course only few people in Iran speak English so most of the invites were coming from English language students or those studying tourism. It did mean though that they were all open-minded people and had great families supporting them in whatever they do. It opened up a world of unique experiences, as it led me to the cities Shiraz, Yazd, Esfahan, Arak, Shush, Kermanshah and Tehran.

While some of these cities are not so uncommon for foreigners to visit, places like Arak, Shush and Kermanshah are usually only visited by the foreigners who get invited by their Couchsurfing hosts. It sometimes led to funny situations. At some point I was in a small village called Montazeri, only inhabited by a few thousand more traditionally raised people. Everyone here automatically knew where I was staying as they regularly saw foreigners coming in through one Iranian couple teaching English. They were known to regularly invite foreigners to the region to do a bit of teaching. One day I was walking alone through the neighbourhood, when a man wanted to hang out with me. We could not understand each other at all so it was a really weird experience. We spent about two hours communicating with our hands and feet before my host came for the rescue. Finally he could translate everything for me and I found out the guy was a singer and actually the most famous in town.

Travelling around Iran is not always easy indeed. One thing to remember for example is that some buses claim to be going to a city, while in fact they do not. Instead, they just drop you off on the outskirts of the city at a random roundabout. This happened to me several times, and it left the people around me in panic. A foreigner with two big backpacks stepping out of a bus in the middle of nowhere. It surely must be something they don’t see every day. But the reaction was great: they were very concerned about me and everybody wanted to help me out. The tip here is to buy an Iranian SIM card so that you can arrange that your host will pick you up somewhere or lead you to a familiar place. I regularly handed over my phone to someone passing by, so they could figure out what my intentions were.

Another unique experience was when I was staying in Kermanshah. My host offered me to visit a famous inscription located high up a mountain, far out of reach form the general public. He knew an archaeologist working there who could provide us with special access. It was an offer I could of course not refuse. So, together with a brother and his father we went and had an amazing time. The pictures you can find below.

To keep it short, I hope you can see Couchsurfing offers plenty of opportunities to discover Iran from a different perspective. In fact, many other travel blogs will also tell you not to book any hotel and instead just go couchsurfing. I am not alone sharing this tip. And yes, of course Iran has its dark sides (which you will most likely know from the media), but as a traveller as long as you stay out of trouble it’s a true paradise. The only dangerous thing in Iran is crossing a street.

Once you have visited Iran, hospitality will get a totally different meaning and will never be the same…