A small forgotten kingdom in southern Africa, squeezed between South Africa and Mozambique. Swaziland is either known for having the highest HIV prevalence in the world, or for king Mswati III with his 16+ wives. During a ceremony to celebrate 50 years of wildlife conservation success last year, I managed to sneak in and meet up with the king. “Thank you for your help in our conservation efforts”, he told me.

The arrival of the King was a major happening. Already the day before, the military was brought in to set up a secured perimeter around the Reilly’s Rock Hilltop Lodge where the ceremony would take place. Dozens of military men, well armed, were strategically located in bushes overlooking the planes around the Mlilwane Wildlife sanctuary. The king, a controversial man who assumedly rules his country with iron fist, rarely shows up in public. 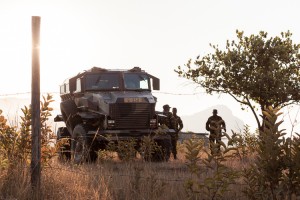 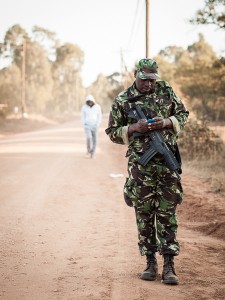 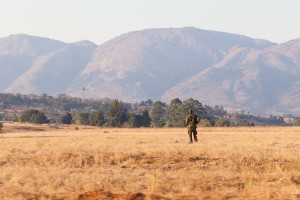 But all these security measures I only learned about hours after my meeting with the king. Together with two Swedish friends we were just casually backpacking through Africa when we heard about his planned appearance just a stone’s throw away from where we were staying. Our accommodation was the Sondzela backpackers, located inside the heart of the Mlilwane Wildlife sanctuary. We had only arrived the day before from Johannesburg, so we knew only very little about the country. But I had heard about the king and his more than a dozen wives before. I knew I couldn’t let this opportunity pass.

The king, a controversial man who assumedly rules his country with iron fist, rarely shows up in publicBart

So, without any invitation we woke up early in the morning the next day. Without even knowing the exact location of the ceremony we used the only entrance road we knew about, which later turned out to be a back door. Lazy to walk the whole way, we hitchhiked in the back of a pickup truck that happened to pass by at such an early hour. Without us knowing it yet, the truck was carrying some ceremonial supplies. This way we could drive straight through all gates. No questions asked…

Once inside we noticed we were right on the spot, but still a few hours early. Never could we have imagined it would go that smooth, so we had some time to spend getting familiar with the place. I noticed the sound system was still missing, the stage was still being built, the king’s seat still not polished, electricity cables were still being fabricated on the spot, and so on. We were in though, and it seemed like no one really bothered about it.

When the time finally came that the king was about to arrive, the ceremony started. Dancers started performing ritual dances, security men took their positions, and everyone in the crowd finally chose a seat. The atmosphere built up as everyone was anticipating on the arrival of his majesty Mswati III. We managed to get three front row seats.

The moment the king stepped out of the car was one of the highlights of my trip. Little did I know that hours later I would be speaking to the man in person. I looked at my Swedish friends sitting front row. Two days ago we’d been sitting inside minibuses all day, not even knowing where we would be sleeping. And here we are now, witnessing one of the king’s few appearances in public.

After several speeches of, among others Ted Reilly, finally the king took the stage. It was a long speech, after which a ceremony followed to unveil a memorial statue. Mr. Reilly and Mswati III then went for a short walk around the area. With about 15 security men surrounding him it felt like I could not get too near the two. Nevertheless, I started following them and tried to get as close as possible to took good photos.

I seriously had no idea what the king was talking aboutBart

But then at some moment of relaxation the king spotted me. I was dressed like a homeless person, not knowing I would ever needed nicer clothes because I am meeting a king. Anyway, I stepped forward and saw how the security men allowed me to get up close along with my Swedish friends. Then he asked me where we were from. “I am from The Netherlands”, I said. “We are from Sweden”, said my friends. “Ah Holland, a lovely country. Thank you for your help in our conservation efforts”, Mswati III told me.

I seriously had no idea what he was talking about, if only it were that I was actually paying attention during his long speech on stage. He was referring to the Dutch Prince Bernhard, who not only loved the Reilly’s Rock Hilltop Lodge, but who also worked with the king personally for many years in pioneering wild life conservation in Swaziland, together with mr. Reilly.

In the background the security men were getting a bit nervous but I kept cool. I got a bit closer to the man, pointed the camera and pressed the button. CLICK.Bart

So I found myself in a unique situation. The king had just broken the ice, so I asked him if I could take a picture with him. Hesitatingly he said okay. So, I pulled out my iPad and starting pointing the selfie camera towards us. “Oh”, he said a bit uncomfortably, being surprised to see his own face on such a large screen. In the background the security men were getting a bit nervous but I kept cool. I got a bit closer to the man, pointed the camera and pressed the button. CLICK.

I realised I looked horrible, wearing the oldest clothes I had (I donated them in Africa right before I left). But I had done it. I managed to take the world’s first selfie with the king of Swaziland. This being the ultimate climax of the day, there was nothing left than to leave mr. Reilly and the king to it so they could continue their conversation again. My mission was completed.

One of his security men later walked up to me and said, while still being shocked: “No one has ever done that. You are so lucky!”. And with those words we proceeded to a free dinner, thinking that indeed we had been so lucky. With just spent €0.30 in total for a killer day. I made sure to backup my photos as soon I got back at the hostel and tell the story to my friends. Now, I am looking back to see that these memories will probably be forever on my mind. And with this post I am sharing one year later, I guess the selfie picture will be too.