Kosovo – a Long Road to Recognition 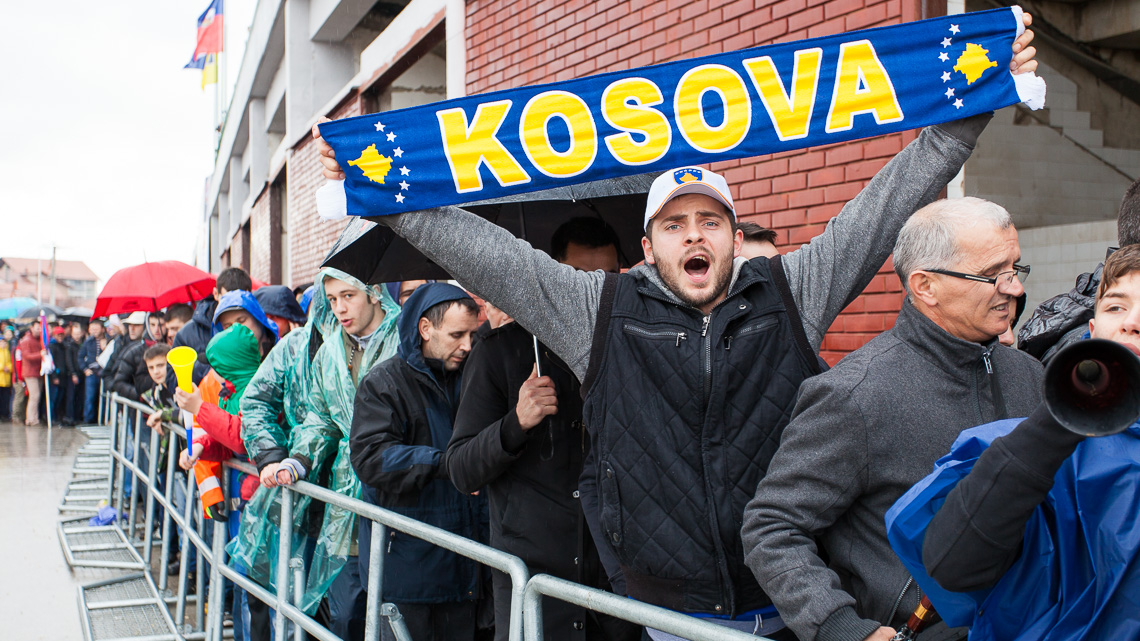 During the nineties, the Balkans were the scene of several violent clashes between different ethnic groups, something that I still remember from childhood by watching the news. One of those clashes was between the ethnic Serbs and Albanians in Kosovo, which escalated in 1998-1999 and is better known as the Kosovo war (sometimes referred to as the Kosovo-Serbia war). On February 17th 2008, Kosovo made a controversial declaration of independence and established Pristina as the new capital, overruling Belgrade’s control over the area. Since then, Kosovo [Albanian: Kosova] has been a disputed area that needs a constant presence of an international UN peace keeping force, who you can still find on the streets today.

Controversy over the independence claim still remains. A majority of 110 out of 193 member states of the UN recognize Kosovo, but a minority of 83 do not, including Russia, China and other highly populated countries like Bangladesh, Indonesia, India and Brazil. This makes it that, technically speaking, Kosovo is not recognized by the majority of the world’s population. Having that said, I have been to Serbia four times and thus if I respect my Serbian friends’ situation, I cannot claim that Kosovo could be country number 50 on my list. So I decided that in March this year, a random six years after its supposed birth, it was time to see for myself what the situation was like. Is Kosovo still a province of Serbia, or is it really the world’s second-newest country, is it something in between, or is part of it perhaps a new ‘territory’ for Albania with a fancy new flag? Little did I know, it was the right time to go and learn more about it.

Staring at the mountains while sitting on a bus from Skopje, Macedonia towards the border, I kept wondering: would I get a Kosovar entry stamp, and how would it look like? Having one could lead to problems when travelling on towards Serbia but I was not planning to leave Kosovo anyway; the stamp would serve as a nice souvenir in my passport. After clearing the Macedonian border, a Kosovar border patrol officer came on board and took my passport. Some words were shared with a young family behind me -of which I could not understand what they were saying of course- and they were taken out. Ten minutes later they would all return though, I got my passport back and in the end the whole border crossing progressed just like any other border crossing I had done. Nothing special.

“How are you liking Albania so far?”

Quickly after arriving in Pristina, I tried to catch a bus on a main street 5 minutes walking outside the main bus station. A girl stood next to me so I asked if there would be buses at all, considering I was waiting in the rain already for more than 20 minutes. “Maybe not, it’s Sunday”, she said. “You are better off taking a car [illegal taxi], they cost the same as the bus. Where are you from, how are you liking Albania so far?” “I am from The Netherlands, I just arrived here but it is a bit rainy!”, I answered. Meanwhile I was confused, did she just say Albania? In the days to follow, I would find out that pretty much all people that I was about to meet, were actually Albanian.

The distinction between Kosovo and Albania remained vague throughout my visit. Whereas the official blue-yellow flag is cleverly designed with six stars to represent six major ethnic groups in Kosovo, many people identified more with the Albanian flag, dark red with its distinct black double-headed eagle. It almost came to me as if the U.S.A. felt more for the stars than its own citizens. At each press conference by the Kosovo government, an American flag appears clearly in sight next to the Kosovar one. Kosovo has a special relationship with the U.S.A., and in particularly ex-president Clinton. A more than life-size statue of him, located on the Bill Clinton Boulevard, was erected as a big thank you to the ex-president for helping Kosovo during its struggles.

But today Kosovo is still struggling, not only in getting recognized (which I believe does not help for the economy either) but also with unemployment. Reportedly, overall rates are about 35% and youth unemployment at 60%. Kosovo has a very young population, more than half are younger than 25 years old. However, perhaps because of the high unemployment rates, there is not so much going on in Pristina. Local youth mainly spends its time drinking coffee all day with friends and do not seem to be too interested in making contact with new ones, like for example a lonely Dutch traveller. Probably the main ‘tourist’ attraction in Pristina, one of few, is the huge letters ‘NEWBORN’. They are painted each year in a new theme, during my visit in army colors to commemorate the fallen ones during the fight for independence. Personally I preferred the more colorful version of years ago, when each country that recognizes Kosovo gained a spot for his national flag on the letters; a lot more colourful and positive I would say.

Fortunately, I met an English guy in the hostel who claimed to be in Kosovo to report on a football game between Kosovo and Haiti that was taking place soon. Tickets were sold out within a few hours earlier that day, so I reckoned it must be something huge. While Kosovo had played as a team before, this one was the first ever FIFA-approved match and thus a major event for the Kosovars. With some help from the journalist, I was quick in obtaining press accreditation for the match so one day before the match I went off to check out the city where the game would take place, Kosova-Mitrovica.

Kosova-Mitrovica is the one place in Kosovo where tensions between Serbs and Albanians, or perhaps even Serbia and Kosovo, are best visible. The city is split up in two by a river, on one side you find the Albanian people and on the other side there are Serbs. On one side you pay with Euros, on the other Serbian dinars. Even though there are multiple bridges that you could cross in a normal way, the main bridge is the symbol for the tensions between the two sides. It is barricaded by the Serbs to send a signal to the Albanians that they are not allowed to advance any further into Serbia so-to-say, which occasionally leads to anger on the other side and therefor the place is constantly monitored by KFOR troops. Why this city was chosen over Pristina for the location of the match remains unclear, but I guess provoking could be a motive. With the Serbian side just a few hundred meters away from a still unfinished renovated stadium, I wondered if things would possibly get out of hand tomorrow. Nevertheless, I crossed the bridge to go to the Serbian side, changed some money at an exchange office and went for some cevab and pivos and chat a bit with the people there. At no point I had the feeling I was in Kosovo anymore, the only hint was the missing [Kosovar] number plates on most of the cars; a silent protest against rules imposed by Pristina. People genuinely did not seem to bother about anything going on on the other side of the river. With the evening closing in, it was time to go back to Pristina.

The next day I returned to Mitrovica. The stadium never finished its renovation required by FIFA, so the game was taking place early as no lights had yet been installed, and also toilets and power sockets were missing. The whole event proved to be a perfect showcase for witnessing the national pride and identity of the people of Kosovo.

“The missing number plates on most of the cars,
a silent protest against rules imposed by Pristina”

Opportunistic merchandise sales men surrounded the stadium, which in high anticipation of the game was already jam-packed hours before. It was a day on which rivalling hooligan groups would ‘accept’ each other for the sake of Kosovo -be it only on that day- and where understanding the loud choirs taught me more about the current situation in Kosovo than all of my other days so far.

Having been at a football game of the Serbian club Partizan in 2011, I knew Kosovo was one important subject in the overall extremely racist choirs from the ultra’s [hooligans] there. This football game proved to be no different. While the Serbian hooligans back in Belgrade wish the worst for Albanians, the Albanian hooligans wish exactly the same back and both of them claim that Kosovo is theirs. Hooligans in the Balkans are no joke!

Even though the game never saw a goal getting scored, that day might have marked a new era in Kosovo’s history. Not that FIFA should be considered as the ultimate reference, but steps are continuously being made that contribute to the recognition of Kosovo as a country. This left me with the question whether I can count Kosovo as my 50th country that I have visited? If I would simply follow what my government says, I should say yes. But if I look further, there are actually three sides of the story I believe. One of the Serbians not willing to give up the region, the other of Albanians just treating it as an extension of Albania, and one where other countries involved see Kosovo as Kosovo, a country of six major ethnic groups that acquired the recognition of the majority of the world’s UN member states.

That leaves me with two things: no definite answer on my original question whether Kosovo was 50th on my list, but at least I do have another stamp in my passport. Let’s just leave it like this. Geopolitics will never be easy…

Having accepted the Euro as the official currency, Kosovo is without a doubt the cheapest country for spending Euros. A good home-made pizza with a huge tuna salad and two beers will cost you about €10 in a small restaurant, and sipping excellent macchiatos in a fancy little bar costs €1. Espresso’s cost €0.50 and some breakfast (Burek and Ayran) is about €1. Travelling by bus for 1.5 hours costs about €1 either and hostels are at an acceptable rate of €10 per night. In general, it is very safe in Kosovo. Clashes between Albanians and Serbs only rarely take place these days, moreover if they ever would, it would probably be situated in the northern part of Kosovo away from Pristina and foreigners will not be targeted.