They look like Jack Sparrow, wear kohl eyeliner and are masters at deceiving. There is a huge and underreported industry behind the Bedouin romance scammers of Jordan. Also known as ‘Bezness’, this form of love fraud is Petra’s darkest secret.

What is romance scamming?

Romance scamming is best described as ’emotionally manipulating someone into a fake romance, where scammers slowly work on their target to gain financial and/or material benefits’.

It is also generally known as Bezness, which combines the German word ‘beziehung’ (relation) and the English word business. Especially in touristy areas, like in some parts of Egypt, Tunisia, the Carribeans and even Ghana, Bezness has become an industry on its own.

Why is it underreported?

Petra is often called the rose-red city half as old as time. It plays a crucial role in Jordan’s tourist industry and attracts people from all over the world. I was there myself and never did I know what was going on behind the scenes. It’s not the first thing you think about when in such a beautiful place.

You can imagine the same goes for the victims. Often too late, with both financial and emotional damage, the last thing a victim will do is to look for publicity. They feel ashamed, guilty, possibly angry and all they want is to forget about their experience and move on with their lives.

Bedouin Bezness – How does it work?

The Bedouins in and around Petra call it ‘fishing for tourists’. The way it works is that once in Petra, some bedouin men approach solo female travellers to give them a private tour. They will take the girls to caves in the mountains, to the most beautiful views, they will make fire and cook, introduce their family, dance, drink, watch the sunset and sunrise on a blanket under the ‘shooting stars’.

Many Western women aren’t used to all that attention and romance. They get swept off their feet. The requests for cash only come later…Safety in Petra - Facebook Page

The main goal for them is (1) to have sex with the girls and (2) to deprive them from their money, but only once they have returned home. They will contact the girls telling them they need money to get them out of trouble. Common lies are:

Through Western Union they will then receive the ‘donations’, some of which are transferred on a monthly basis. 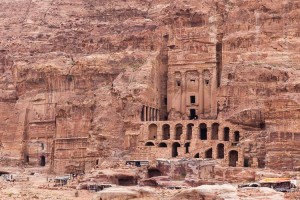 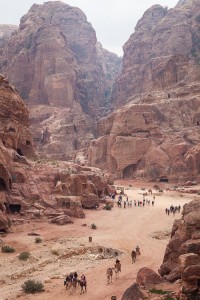 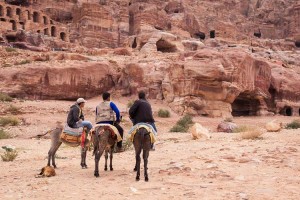 The key point of this article is to make women aware of romance scamming, to warn them and provide them with tips how to avoid becoming a victim. Jordan is a fabulous country to visit, Petra is stunning and the Jordanian people are very friendly.

When I visited Petra myself I met a (female) backpacker who later embedded with the Bedouins for several weeks. She explained me everything as she observed the daily practice of Bedouin Bezness. Being an insider, she assured me that romance scamming in Petra is thriving.

I started doing more research and found first-hand victims who, under the condition of anonymity, told me all about romance scamming in and around Petra. I also learned about some Facebook pages that aim to unite the victims and bring Petra’s darkest secret out in the public.

The victims so far

I was told that over the last three years 200 female victims have confirmed they were scammed in and around Petra by bedouin men. Through private messages sent to the admin of this Facebook page, women from around the world confirmed that they had fallen victim to the men listed there.

The typical victim is a solo female traveller either from the US or (northwest) Europe, some are from Japan or Australia. They are between 20 to 50 years old and could stay with a bedouin man for years before discovering the truth. It’s not uncommon for girls to go back to Jordan on several occasions, thinking that they are the only one to be with the man. Yet some men will have between 2-3 girls at the same time. Financial damage can go into several thousands of dollars, but it depends on many factors.

How long has it been going on?

The oldest report I found dates back to 2010. I was told however the scamming business around Petra is handed over from generation to generation (much like in other parts of the world where romance scamming prevails). Some scammers start deceiving women long before even reaching puberty. I can only guess that this form of scamming has been around for decades. That also suggests that the total number of female victims from the Petra bedouin scammers should be well over a thousand.

Some of the girls told me that nearly all of the Bedouin men in and around Petra are potential scammers. For some it might be full-time business whereas for others it’s only an extra. Yet some often heard claims are:

So who’s to blame?

Technically the scammers are not stealing money. What the woman give, they give freely. On the other hand it’s a fact that the bedouin men are deliberately exploiting their victims. These victims, once they find out are hurt emotionally and have been tricked to transfer large sums of money for causes that turn out to be lies.

Yes and no. There is one shocking report of rape, though I also know about women who visited Petra without any problems or suspicion.

One victim was very clear to me. She said that female travellers should not be afraid to visit Petra on their own. She did stress the following:

“Be prepared to be bombed with invites for free rides and tours, be offered tea and traditional meals, romantic night walks, sleeping in caves, etc. Do not be fooled by the spirit of hospitality, be flattered or feel that you might offend local culture by saying no. Better say shukran (thanks) and move along. Nobody will hurt you from that moment on.”

Other tips I found:

Bezness is also thriving in Wadi Rum. Again, when I was there myself for two days I wasn’t aware of it. But reading the reports and reflecting on the things I seen myself in the desert it now makes sense.

If you want to know more about it, check out stopscamminginwadirum.wordpress.com.

Update October 2016 – The website above appears to have been taken offline. Search Google for other ways to find related warnings.

Disclaimer: This article is not for naming and shaming the scammers. As you can hopefully see I have not done that. I also refrain from saying all bedouin men are scammers. It’s up to you to develop your own opinion. Some of the websites I shared could serve as a further source of information. The photos in the article are my own, I do not claim that any of the photographed people are linked with the scamming industry.

1.1k
SHARES
ShareTweet
[wysija_form id="4"]
Previous Article10 Reasons Why I Shouldn’t be Alive
Next ArticleThe Easiest Way To Get a Cheap Chinese Visa

Back in 2014 I visited, by myself, the Ukrainian-c

Exploring ancient lands in a forgotten corner of t

Secret picture inside a militia checkpoint in Iraq

Is this the most beautiful monument in the world?

Iraq, where you can have ancient Mesopotamian wond