A Rare Football Encounter Between Albania and Serbia

It could have been the most historic football game ever for Albania. But after a 0-2 defeat against Serbia, all that’s left is perhaps the title of the most anticipated game in Albanian football history. Since it was one of my highlights in my photography career, let me take you back to this period that I covered meticulously from the beginning till the unfortunate end.

I arrived in Albania 12 days before its national football team would play a EURO2016 qualifier against Serbia. Because I knew what happened during an earlier encounter, and ongoing tensions between the two countries in general, my visit to Albania turned quite quickly into a mission to see the game with my own eyes. No matter what.

Tickets were already long sold out. Demand had exceeded supply by tenfold, and prices on the black market were sometimes as high as €500 per ticket (about two months of salary). Albania never succeeded to secure a place in Europe’s most important football tournament and by winning against Serbia it could directly qualify. So I started contacting some journalists that I already knew from the game of Kosovo playing against Haiti, 1.5 years earlier. I learned about a webpage where I then officially applied for a press accreditation.

Meanwhile, I moved on to contacting photographers all over Albania to find an extra camera body with an adequate sports photography tele lens (the longest I am carrying on my trip is a 85mm on a full frame). In Tirana I met up with several of them and quickly made friends.

A few days before the game the journalists that I already knew arrived. Some of them were writing for The Guardian, New York Times and The Times. I felt privileged to be hanging out with them and together we spent some long days prior to the game. There was lots of stuff going on in local media, especially when Albania’s most heroic supporter got arrested after a gun incident (long story, but read about it here).

Myself I choose to go to a press conference at the Albanian Football Federation, just out of interest, and photographed the football coach of the Albanian national team.

The day before the game me and two journalists travelled 45 minutes to Elbasan where the game would take place. We scouted the city to learn more about the security measures that were being put in place. We met a man who was guarding a huge Albanian flag that was hung just behind the stadium. He was there non-stop, in fear of people trying to take the flag down before the start of the game. 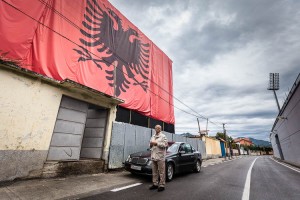 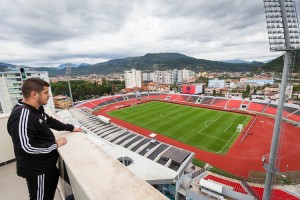 We also went into a few buildings overlooking the stadium. Residents showed us a letter from the police, in which they were asked not to use their balconies or stand anywhere near the windows during the upcoming game. One journalist wrote a piece about that for The Guardian, which features one of my photos I took that day.

The day of the game itself we needed to leave early from Tirana because the police would again shut down an entire highway (to Elbasan), more than 8(!) hours prior to kickoff. I managed to find a shared taxi for just €2, so that was an awesome start of the day.

After arriving in Elbasan we quickly noticed how several extreme security measures were being put in place. I spotted the arrival of several snipers that would take up positions on several nearby rooftops and saw hundreds of riot police getting ready. There were also helicopters flying around and a small rehearsal of an emergency scenario was done with water cannons spraying and a helicopter flying in really low: 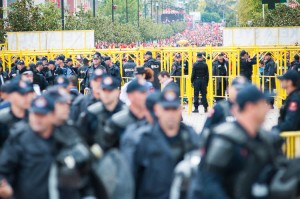 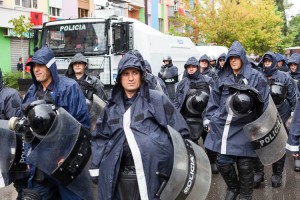 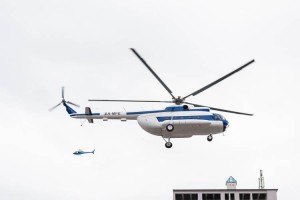 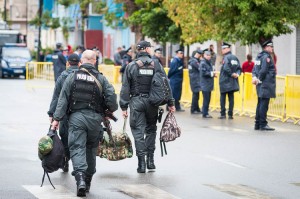 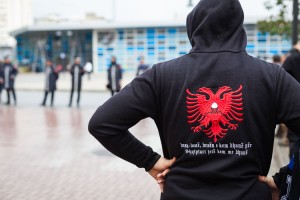 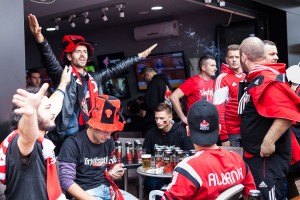 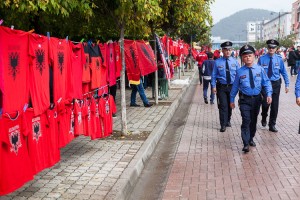 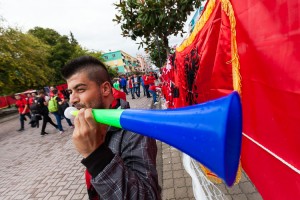 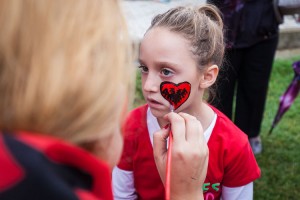 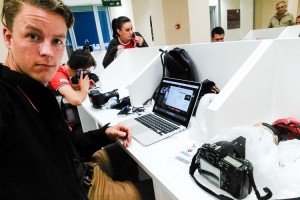 After arranging some stuff with my accreditation at the stadium I walked around the city a few hours photographing the atmosphere among the supporters.

Getting into the stadium for media was quite straightforward. There were several security checks on my camera bag and occasionally I needed to show my passport. The supporters however faced much tougher controls. They were not even allowed to bring their car keys into the stadium, let alone any flags (or fireworks).

Two hours before kickoff I set up my laptop in the media room and walked around the stadium to see where the most fanatic supporters were. Later, I captured the supporters building up anticipation, singing songs and shouting patriotic things. The atmosphere was good, but it was much less fanatic as the derby I visited days earlier. A few ultras told me they did not go to the game because they felt it was more of a PR event for politicians and networking opportunity for rich business men. I felt like there was some truth in that.

Then it was finally time for the game to take place. When the players and referees entered the stadium you could definitely feel the excitement. I pushed myself in between the other photographers and documented the ceremony. The Albanian national anthem was played, followed by the Serbian. Unfortunately the Albanian people started a loud protest, which I found very disrespectful. Also one of the small kids in front of the Serbian players did not seem to like the song. 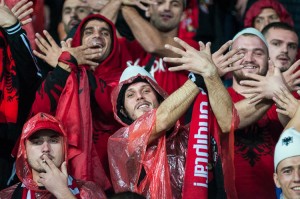 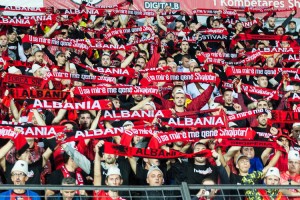 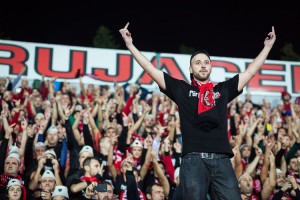 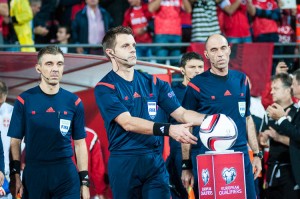 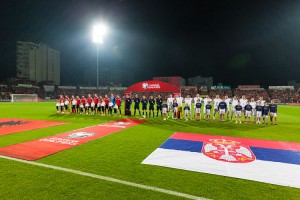 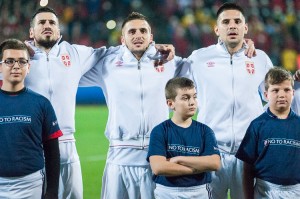 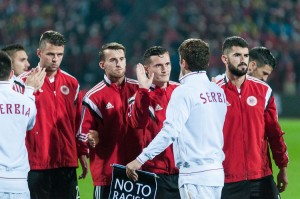 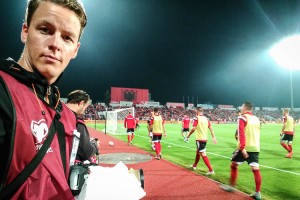 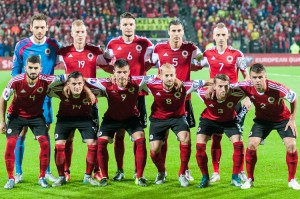 Minutes before kickoff I found a seat a few meters away from the left goal and braced myself to photograph the game, not knowing who I was shooting for. Despite the occasional rain the atmosphere was magical and so far everything had gone well. Nothing seemed to be in the way of the Albanian team to make this a night to never forget.

But the game never really took off. There were a lot of tensions and none of the sides made any real progression with a 0-0 score all the way until the 90th minute. Only in the end it was Serbia who managed to score 2 goals before the final blow of the whistle. The stadium was in shock, and so was I. People later claimed the national had been put under too much pressure by local media, which to them explained the poor performance. 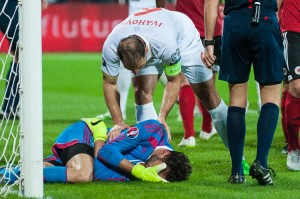 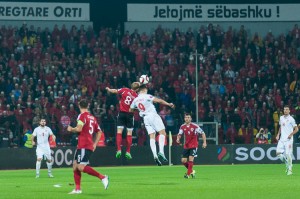 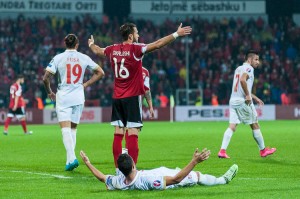 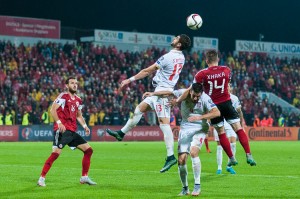 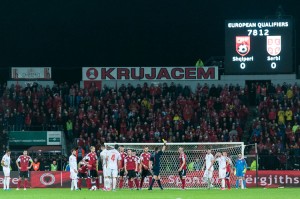 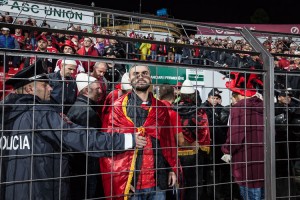 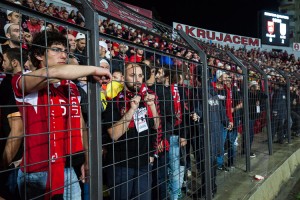 Supporters left the stadium in shock, some of them even crying. Also for me it was a sad moment as I too had anticipated for days to witness the country’s largest celebration ever. Instead, some supporters turned angry on me for photographing (other) supporters’ emotions. I think they believed I was Serbian media, and they could have ended up like this on the front page of a Serbian newspaper.

But for me the shot of the crying fan was enough. I walked away knowing it marked the end of my documentation of this high profile event. The anti-climax, the despair and the anticipation that was blown to bits in a matter of minutes – it was all captured in this final frame.

I think they believed I was Serbian media, and they could have ended up (…) on the front page of a Serbian newspaper.

All that Albania could do now was to win against Armenia, which it luckily did days later. Tirana could finally turn red as the victory sparked massive celebrations across the country and beyond. Myself I was in a small mountain village in the north at that time, watching the live images from the capital as young kids outside were throwing firecrackers on the streets and lighting up red flares.

Albania’s first game in Europe’s tournament is due on 11 June, playing against Switzerland.