How to Avoid Getting Scammed at Egypt’s Great Pyramids

The Giza pyramids are truly a wonder of the world, with amazing architecture and stunning panoramas. Yet, they are also in one of the world’s most popular sites to encounter a wide variety of travel scams. Touts and scammers are working overtime trying to steal your money using lies, tricks and intimidation.

Unlike what most will think, the scams at the pyramids are not a result of the economic downturn that followed the Arab spring in Egypt. Scammers have been operating there for a long time, ruining the experience for some tourists. This article will list some crucial info, based on my own experiences, to outsmart these guys:

Scam 1 – You are going the wrong way

Independent travellers like me often go to tourist sites using public transport. This way, getting to the pyramids involves a bit more of an adventure, it’s cheaper than an organised tour (1-hour from Tahrir, €0.46) and allows for more freedom.

The thing is however that the drop-off point of the minibus is a few hundred meters away from any of the two ticket offices. On the way, expect at least 10 different people to tell you that you are going the wrong way. They will want to show you their route and then ask for a small tip or bring you to some shops or tour companies. What also happens is that some people claim it’s too far walking and telling you better to ride a horse cart or camel.

Remedy: Get an offline map with GPS like CityMaps2Go or MAPS.ME and use it as the only reference to tell you where to go. Never get into a conversation with any of the scammers and do not react to people shouting at you from a distance.

Scam 2 – Show me your ticket

When you enter the Giza pyramids, you will pass through a security check with x-ray scanners and an official checking your entrance ticket. But as soon as you then enter the actual site, some guys without uniform will approach you claiming they are police. They demand to see your ticket. Once they get it in their hands they will only give it back after you pay them a bribe.

Remedy: These guys are no police, just regular touts. Never do anything they tell you to do, even when they start to intimidate and threaten you. Also don’t expect the police to step in because they are all part of it. Try to remain calm and polite, stand your ground, and eventually the guys will give up.

Scam 3 – Let me take a picture of you

Young guys offer you to let them take a picture of you in the classic pose of grabbing the top of a pyramid. They typically only approach people who are alone. Once they took the picture they will ask for a small ‘baksheesh’ (tip) for their service.

Remedy: If you want a picture like this, just ask some other travellers to do this for you.

Inside there are young guys walking around with t-shirts wrapped in plastic. They approach you in a friendly manner, try to engage in a conversation and then give you a present. Even if you do not accept their present, they will try to force it into your bag, squeeze it between your arms or even throw it at you. Finally they will of course ask you to pay for it.

Remedy: Stay polite but be very firm you are not looking for any presents. As soon as they start forcing their present on you (which they will!), put your hands in the air and say “No”. They will intimidate you, but eventually give up since they are creating a scene of unwanted attention.

Camel guides often tell you that you can see more by riding their camel. The thing is however that they will still walk alongside the camel themselves, so it is not quicker than walking on your own. The only way they seem to be saving time is by rushing it through all the spots so that they can get a new customer quickly after. Also don’t forget that riding a camel is pretty uncomfortable and highly overpriced (typically more than 10 USD for an hour).

Remedy: Just walk around the place by yourself and take some hassling for granted.

To my believe, there are only five ways not to be distracted by scammers at the pyramids:

Please be aware that there are even some more sophisticated scams that already start all the way at the Giza metro station (9km away). Don’t be fooled by overly friendly locals saying they are also visiting the pyramids. In most cases this is not true. 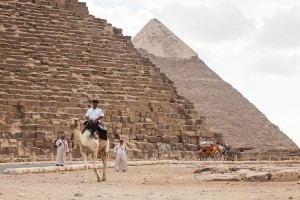 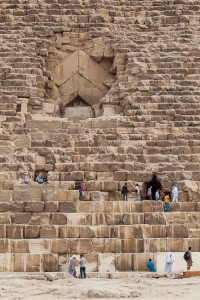 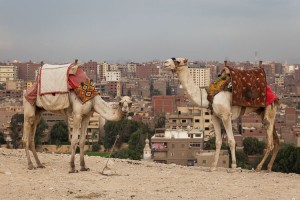 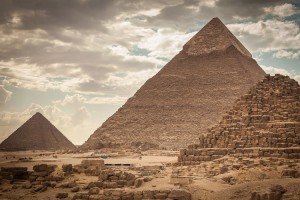 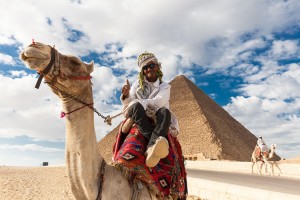 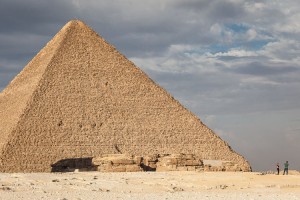 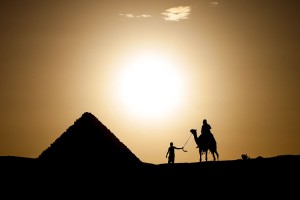 22
SHARES
ShareTweet
[wysija_form id="4"]
Previous ArticleI Got Locked up inside an Ancient Egyptian Tomb
Next ArticleThe End of a 100-Day Journey: My Wrap-Up

Back in 2014 I visited, by myself, the Ukrainian-c

Exploring ancient lands in a forgotten corner of t

Secret picture inside a militia checkpoint in Iraq